The aim of this exposition is to introduce our visitors to traditional crafts, which were held in medieval monasteries as well as in medieval cities. Our visitors can see and explore authentic equipment of individual craft workshops and craft products, and try to create something him/herself. The concept of this sub-exposition complements the historical arts and crafts exposition. It introduces traditional crafts held in medieval cities and monasteries. Craft workshops of various craft professions are a part of this sub-exposition. They are equipped with replicas of production tools, which are used by the craftsmen in the traditional production of various products in front of our visitors. 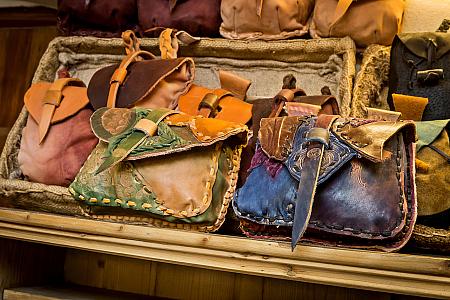 The exposition takes our visitors in a saddler workshop. Saddler were of utmost importance in the middle ages, having made the harnesses not only for riding horses (war and travel), but also for work horses alongside the bridler. The upswing of saddlers´ specialisation can be observed in the 14th century. Saddles were since the 13th century divided into saddles for battle, tournament or traveling. Shoe making was a profession that has only just emerged in the middle-ages. It was mostly connected to the art of leather working and leather tanning. We know first shoe makers in Czech lands from the medieval period, who held special privileges. Among special shoe maker´s tools are the last, stitching awl, shoe-maker´s stool and special threads. Shoes with prolonged spikes were typical in more fashion conscious circles. The bag maker worked with leather alongside the shoe maker and the saddler and his workshop is quite similar to those crafts as well. 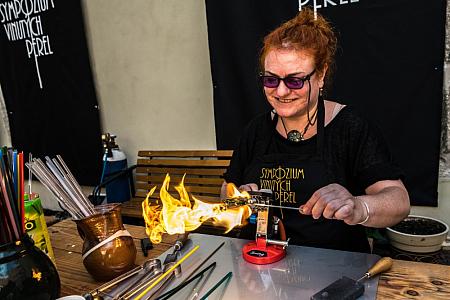 The glass workshop introduces the visitors to the production of glass ware in an authentic environment. Glass making is a craft that has accompanied the mankind for more than five millennia. Glass workshops were established outside the city walls in places with important resources such as siliceous sands in Šumava. In the old times, glass products and glassware were connected to the monasteries. As the glass fillings became commonplace in noble and townsmen households, the glass craftsmanship spread rapidly. The glass maker creates glass pearls in the workshop and the visitors may test their own abilities and create one on their own. 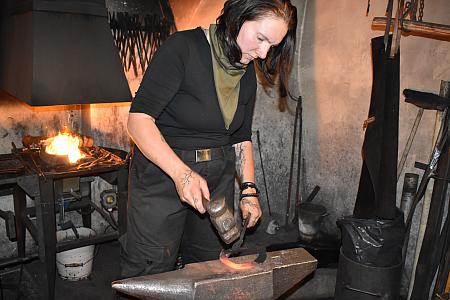 This sub-exposition introduces to the visitors the blacksmith craft along with other related crafts such as jeweller, sword-cutter, cutler and platter. The blacksmithing long belonged to the most important fields of human work and its history reaches to antique times. The blacksmith was a universal wright who created a wide range of iron products. He made mostly iron tool parts, shoed horses and created all the iron products. Our visitors can see other related crafts such as chaising and coining. A functional equipment of the blacksmith workshop can be seen and our visitors can try making a simple iron product.

This exposition is not barrier-free. 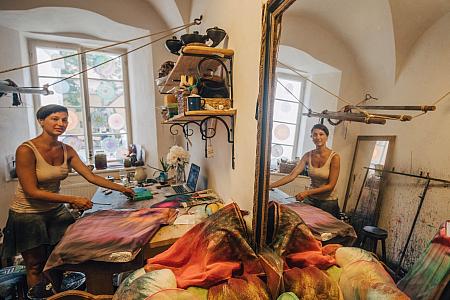 The dyeer dyed the yarns, dyed and dried the fabrics. Initially, colored fabrics were too rare for everyday use and were used only for religious ceremonies and ceremonial occasions. It was not until the beginning of the 14th century that dyed fabrics began to be used. However, it did not reach its growth until the 16th century, but dyed fabrics and fibers did not receive general use until the 18th century. In addition to dresses, the dyeing workshop also produces merino wool hats or decorative mandalas. Come and try the dyeing craft and create an original piece. 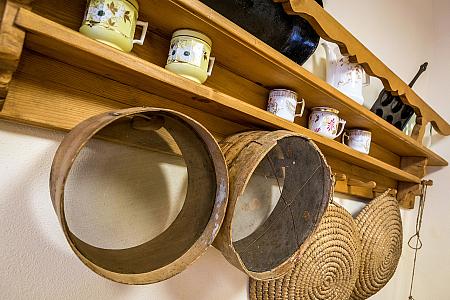 This sub-exposition serves as an introduction of production of bread dough and its baking in the traditional bread oven. It had inner heating, closed with a clay and brick low flat arch. It was loaded with wood and bread through the front opening (čelesno), which partly let the smoke out as well. Holes in the arch served for fume extraction. Our visitors can see a functioning oven in an authentic bakery along with bakery equipment and replicas of tools such as scales, scuttles for bread, or bread shovels. 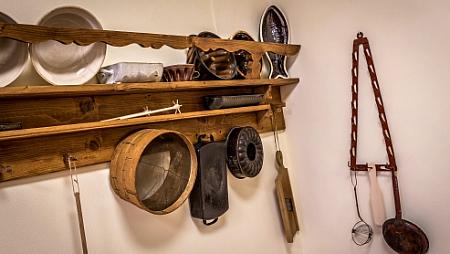 Kitchen of the 19th Century

A room adjacent to the bakery serves as a model kitchen of the 19th century and as a space for leisure and relaxation for the visitors of workshops and seminars held in the monastery area. The predecessor of the presented ´modern´ kitchen would be the so-called ´black kitchen´, which peaked in the 18th century Europe. The end of the black kitchen was connected to the emergence of draft chimneys, into which lead directly operated stoves or cookers. A dynamic change of the appearance and the equipment of kitchens happened due to new technical knowledge and inventions in the beginning of the 19th century. Iron stoves and cookers replaced cressets, because their channelled burning used the fire energy better and the food preparation was therefore made easier. The first model of a cooker appeared in 1740, it was however designed only for food heating, not its preparation. Around 1800 a new model of a cooker appears that also allows for cooking, but it is too big and doesn´t find use in households. In 1834, a cooker for household was patented in the USA that was smaller and could fit into smaller kitchens. A cooker and a rich collection of replicas of historical tableware and utensils, used in the kitchen of the presented time period, can be found in the exposition.