The objective was to create an exhibition that would not be built using the typical model of exhibition spaces. The interactive approach to learning is quickly growing in popularity – this can be seen in the large number of interested visitors who often return to the exhibition of the skills of our ancestors.

The thematically furnished rooms introduce traditional crafts and knowledge of medieval monasteries as well as the life of the nobility in Gothic and Renaissance times. You can mix potions in the alchemist laboratory, try on costumes, create herbal oils and bathing salts, and try stenciling or writing with a quill. The youngest visitors can enjoy our playroom full of toys and the mystical Danse Macabre in the attic. The attic also offers a real gem of this exhibition, a large model of the historical center of the “new town” of Český Krumlov. You can visit playing room and try to play traditional games.

This exhibition is not barrier-free accessible. 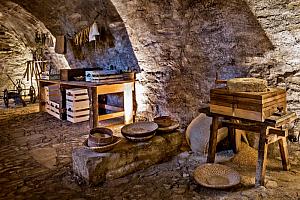 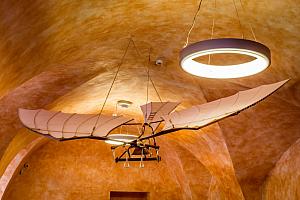 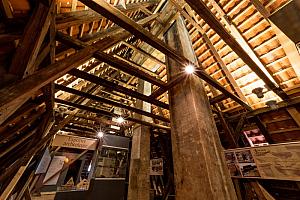 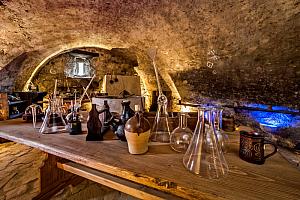 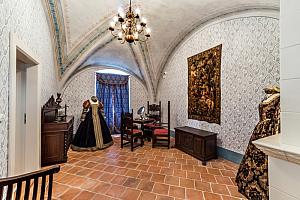 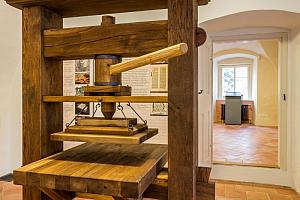 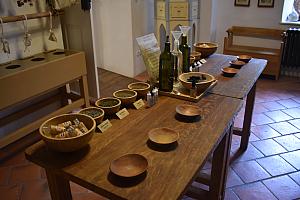 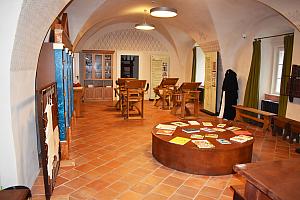 CURIOSITIES FROM OUR EXHIBITIONS 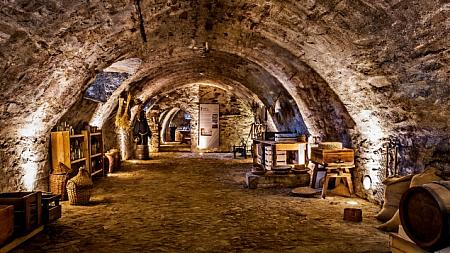 This sub-exhibition shows our visitors how food was harvested and stored in the Middle Ages. People mostly grew grains and harvested them with a sickle, while grass was cut with a scythe. Grain was flailed or worked with a stick and stored in 2-meter pits. The grains were squeezed into the pit, which was then covered by soil, and without access to air they could last multiple years. The pits were often fired with straw and its walls were strengthened with withe (branches and stems). People also grew vegetables: peas, lentils, beans, beets, cabbage, kale, onions, garlic, carrots, celery, cucumbers, and radishes. From the spices, mostly marjoram and cumin were used. The most commonly grown fruits were apples, pears, plums, cherries, peaches, and nuts.

You can see and try replicas of medieval tools (flail, quern-stone, plough and barrow). 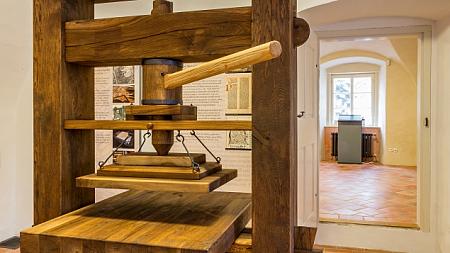 This sub-exhibition shows the book culture of late medieval and early modern Europe. The spread of Bible texts and translations in national languages as well as the spread of humanistic thinking and the new human perspective according to Italian Renaissance intellectuals was made easier by the invention of the printing press in the middle of the 15th century.

Our visitors learn about the technique of printing and types of early print.

Alchemy reached its greatest fame during the times of Emperor Rudolph II, when Prague was considered the capital of alchemy. Because of this, it was sometimes called “the medieval Alexandria”. Apart from Rudolph II, Vilém of Rožmberk became the most famous benefactor of the “hermetic sciences” and most importantly, alchemy. The second center of hermetic sciences naturally emerged around the Rožmberk court. Well-known and unknown scholars, as well as tricksters and imposters, did their research in Prague, Třeboň, Prachatice, and especially in Český Krumlov, which is sometimes called the South Bohemian Mecca of Alchemy. 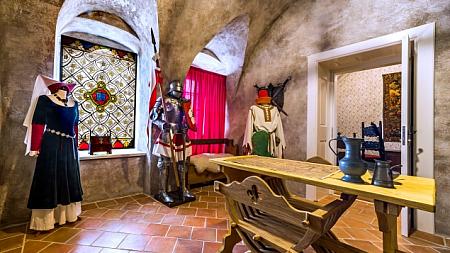 The life of the aristocracy in the Middle Ages wasn’t just full of battles and dance balls, but ordinary human joys and troubles as well. Our Gothic chamber demonstrates the outline and look of a nobleman’s personal space with his favorite items – clothing, weapons, and objects of daily use. Visitors can try out how a nobleman may have felt in his home, they can sit in his chair, look in his chest, touch all of the objects that people from this social class came into contact daily in medieval times, and feel the medieval atmosphere.

Visitors may also try on chain mail and weigh a sword and a shield. 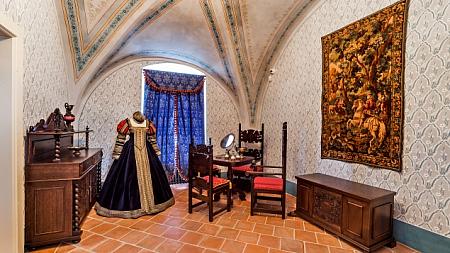 Daily Life of Nobility in the Renaissance

A peek into the daily life of the female part of a noble household; see what a noblewoman liked to do, how she spent her free time, and what her troubles and joys were. All this can be seen in the exhibition of the Renaissance lady’s personal space with her favorite items – clothing, perfumes, jewelry, and embroidery.

Our visitors may sit and feel the Renaissance times, see what’s hidden in old chests, try on perfumes, and learn different embroidery techniques. 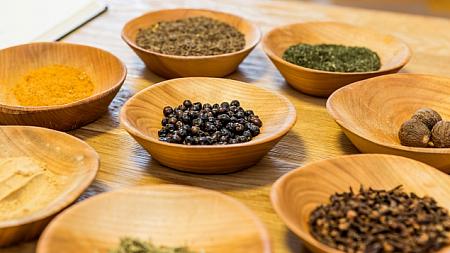 This sub-exhibition introduces a wide range of commonly grown herbs and how they were stored. Medieval monasteries were the bearers of civilization, culture, and knowledge; through them the awareness of healing properties of herbs was spread. New herbs and spices native to the Mediterranean reached the regions north of the Alps through the foundations of new monasteres. Herbs and other materials are introduced through a number of herbs useful in medieval cosmetics. You can see and smell samples of local and oriental herbs from medieval times.

Our visitors may test their sense of smell and touch on interactive boards and panels, and create their own herbal oil. 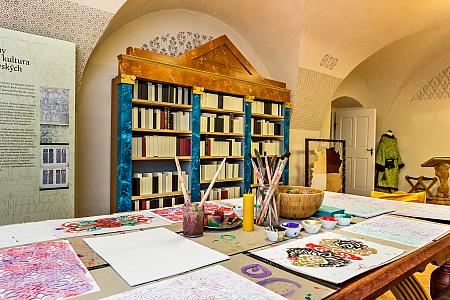 It is a typical craft activity carried out in medieval monasteries. Monks were often the only literate people in society at the time, so monastic scriptories in the Middle Ages were among the exclusive producers of written materials of all kinds.

Try both the craft of writing and other techniques at period writing desks. Find the answer to the question of how difficult it is to sign with a quill pen. 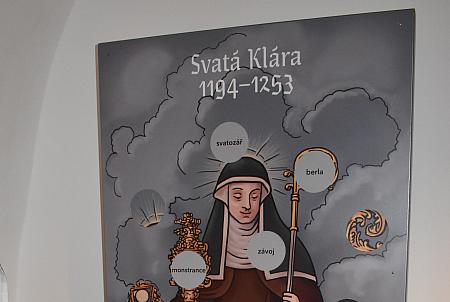 St. Klára, admirer and according to her own words “sazenička sv. František "came from a noble family. Like St. František, whom Klára wanted to follow, was also prevented from living by her parents in a monastery and making religious vows. She was forced to marry, but she secretly ran away from home and sought out Francis, to whom in 1212, at the age of 18, she took the vow of living in poverty, purity and obedience. She thus established a female branch of the new order. They were based on the example of Christ, in holy poverty and piety, caring for the poor and sick.

Find out what a scapular, cingulum or monstrance is. 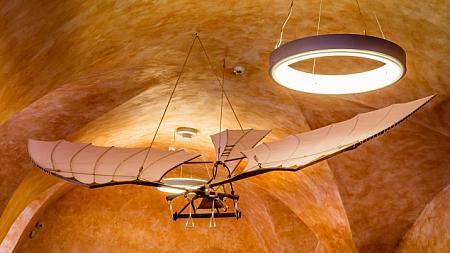 This exhibition shows how people spent their free time in the Middle Ages. Games as well as period toys are available for our smallest visitors. Medieval children mostly played with toys such as horses for boys and dolls for girls, hand-made musical instruments (ratchets and jingle bells), puppets, and building kits made of natural materials.

Another common pastime was inventing and creating various interactive toys and games that people used for amusement. One of the most famous innovators of the Middle Ages was Leonardo da Vinci, whose mechanical inventions are the predecessors of modern machinery. The interactive exhibition is dedicated to toys and inventions; it also shows children and adults wooden replicas of Leonardo da Vinci’s clever ideas that were assembled according to preserved plans, sketches, and schemes.

This exhibition is barrier-free.